There are, maybe, a handful of comic book artists whose careers could be described as impeccable. Whether it’s the growing pains of the early years, or a slow decline in the artist’s twilight, even the most revered comic book illustrators tend to have periods where their work is not quite their best.

Alex Toth is not one of those artists.

One of my absolute favorite artists, Toth set the bar in every field he worked in. His clean, graceful style brightened several comics for years, and he brought that same sensibility to animation, most recognizably with his character designs for Hanna-Barbera. (Space Ghost? Herculoids? Pure Toth.)

And those two career paths crossed at least once when he worked on a little show called Super Friends. When the cartoon debuted on ABC in 1973, it was based on character designs Toth did for all the featured DC heroes and villains, as well as three guest stars — Flash, Green Arrow and …

There are some great notes on this character sheet, and I think Toth’s affection for Plas is obvious — after all, he is “the one and only original ‘Plastic Man!'” A few of the more interesting notes include those saying Plastic Man is wearing flesh-colored tights (imagine the runs in those stockings), and that there shouldn’t be any prominent muscle definition (which makes sense, and has been a hallmark of the character’s design since the beginning).

My favorite, though, is the note at the bottom of the left-hand column: What erroneous model sheets is Toth talking about? Which was the wrong comic book art used? Did Elongated Man somehow nearly sneak his way onto the Super Friends?! That Dibney, man — anything for attention.

While the character sheet includes some wonderful shapeshifting moments, I’ll be the first to say that Plastic Man’s first animated appearance, and his only one in Super Friends, doesn’t really add up to much. Showing up briefly toward the end of “Professor Goodfellow’s G.E.E.C.”, Plastic Man is called in to take care of some … technical difficulties … in his own imitable* way. And then that’s it, at least until he’d get his own cartoon with The Plastic Man Comedy/Adventure Show six years later.

Still, it’s always fun to see Plas doing his thing, and he always seems especially well-suited for animation. Plus, I love that Plastic Man and Superman refer to each other as “PM” and “SM.” Check out the final result!

*”Inimitable” in the way that every other stretchy hero has pulled the same gag since. 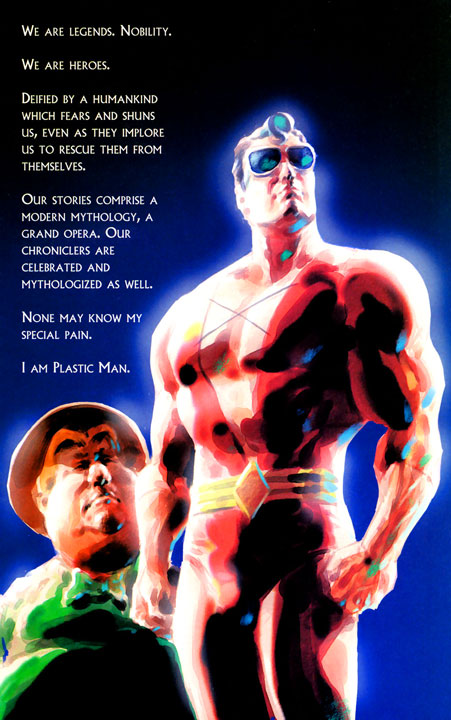 In addition to being a criminally underrated artist and writer, Kyle Baker doesn’t get nearly enough credit as a satirist. And a favorite target was the comics medium itself, which is how he was able to use his Plastic Man series to point out a darkening DCU that’s found its ultimate culmination in Batman v Superman: Dawn of Justice.

Truly, none may know our special pain.