DC Comics launched it latest nothing-will-ever-be-the-same epic this week with the release of Dark Days: The Forge #1, itself a prelude to Dark Nights: Metal, and there were surprises and Easter eggs a-plenty. Of course, around here we’re mainly concerned with one big egg in particular. 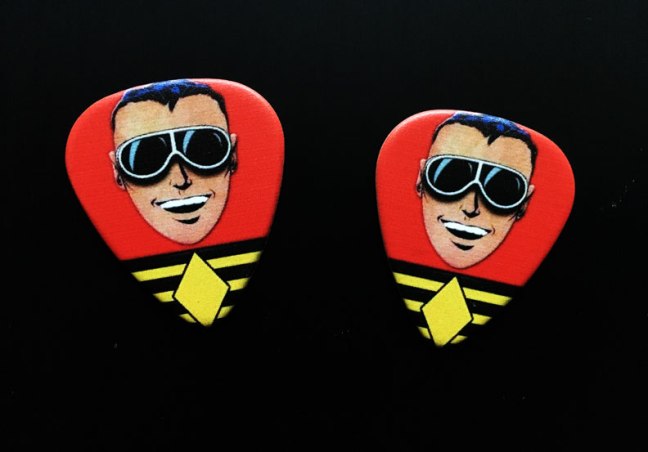 Following up on the fairly lighthearted tale of Plastic Man breaking up the criminal organization known as the United Crooks of America, creator Jack Cole gave readers what is — in my opinion — one of the darker stories in his long run. And while a giant 8-ball wreaking havoc across the country sounds silly on its face, it still manages to be surprisingly disturbing.

The story begins, as such stories do, at the top of a volcano. 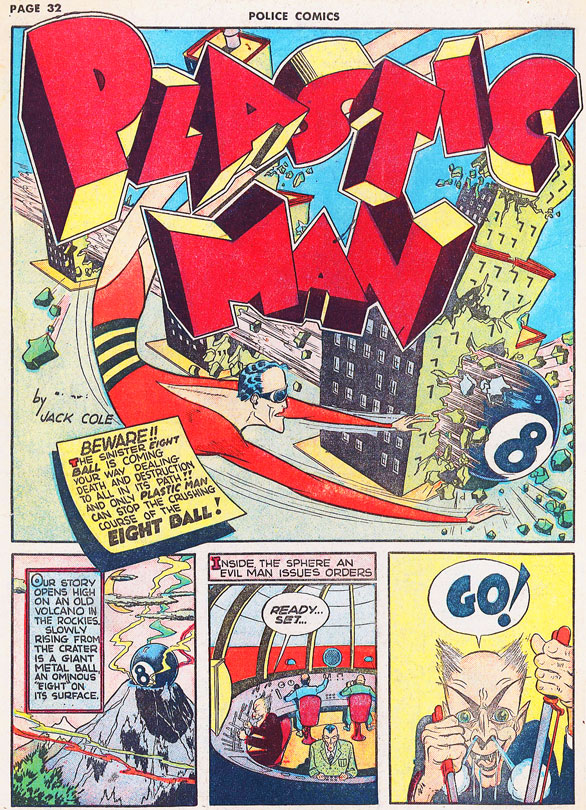 I like that Cole implies there is something inherently sinister about about a billiard ball, instead of the fact that billiard ball is 100 feet high. Also, you can tell Professor McSneer is evil because he’s not only drooling, he’s also blowing steam out of his nostrils. That is a bad man.

I’m posting the next page in its entirety, because it’s a good summary of the plot: Not only is Professor McSneer (a name I’ll never get tired of saying) happy to essentially knock whole cities into the side pocket of ruination, he’s also stealing all the gold and silver that happens to be in the 8-ball’s path. 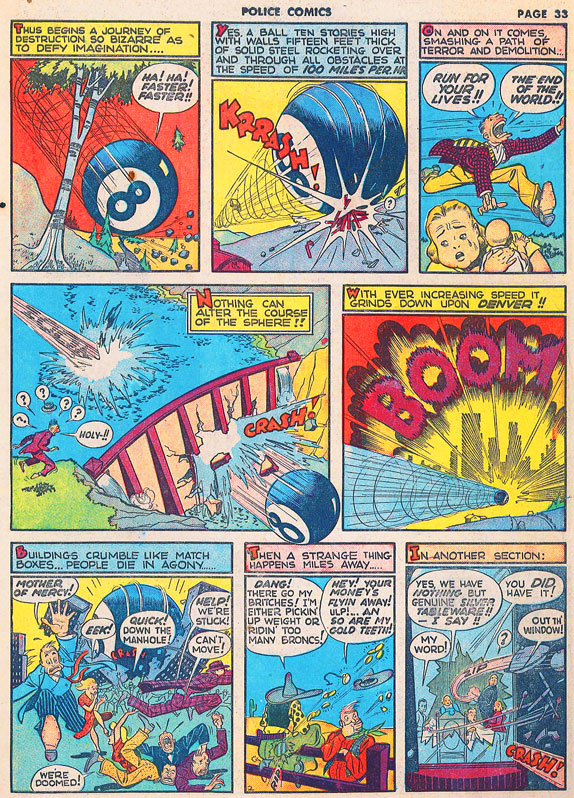 The next-to-last panels, as well as another upcoming panel, are why this particular story gives me the heebie-jeebies. As we’ve already seen, death isn’t exactly uncommon in the Golden Age world of Plastic Man, but the scale here is almost shocking. Considering this was published about three years before the bombings of Hiroshima and Nagasaki, I can only wonder what Cole thought of the destructive potential of the Atomic Age.

While Professor McSneer chortles over his deadly form of robbery, Plastic Man is one the case! Hitching a ride with a westbound airplane, Plas catches up to the speeding wrecking ball.

Unable to find a way in, and after taking a couple of potshots from McSneer’s gunsels, Plastic Man borrows a nearby drill and manages to make a tiny hole he can slip in through. Once inside, Plas remembers that criminals are a superstitious, cowardly and becomes … a snake! 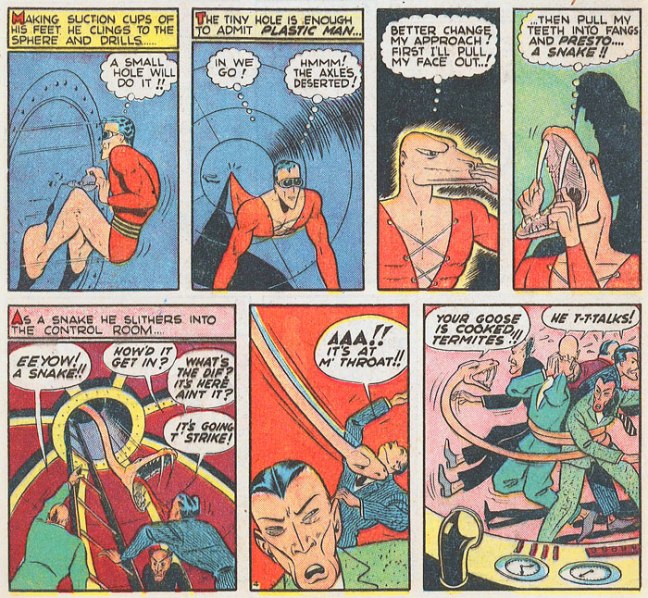 Honestly? That would freak me out, too. (I love the way that one guy in the third panel has just given up and covers his face in his hands — Cole was a master of the little detail.) Plastic Man reveals that he is not actually a snake while holding the bad guys in his pliable grip, and starts figuring out the 8-balls’s mechanism (complete with a handy diagram from Cole — exactly the sort of thing that made me love the Official Handbook of the Marvel Universe). Unfortunately, Professor McSneer still has a trick up his dirty sleeve, and Plas finds himself doused in quick-drying cement. 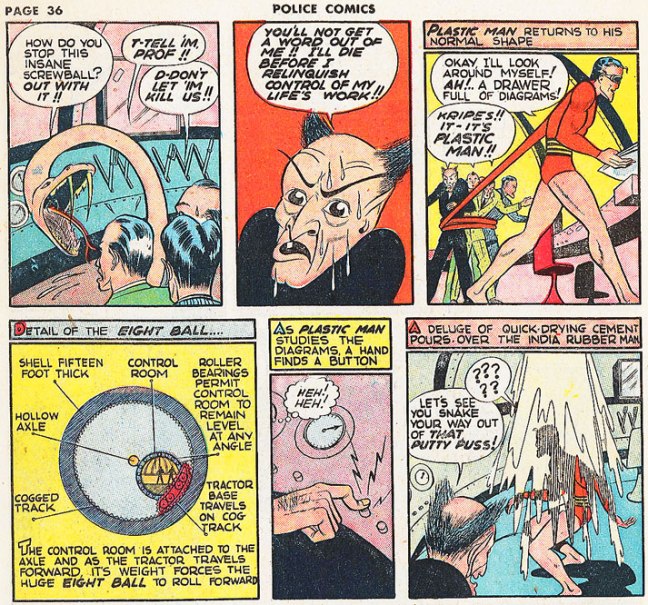 The 8-ball rolls on to Kansas City! An entire Army regiment is helpless before the murderous billiard ball, squashed under its relentless momentum! But Plastic Man escapes from his cement prison, and he quickly puts the kibosh on the gang with one spectacular punch. Plas races to the control panel, hoping against hope that he’ll be able to stop the 8-ball before it reaches Kansas City. Will he do it?! 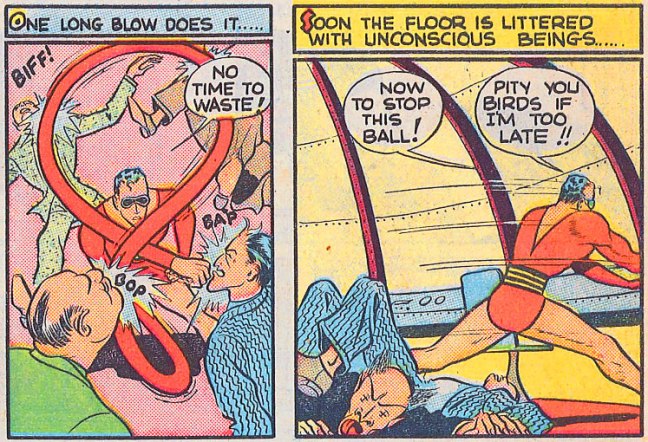 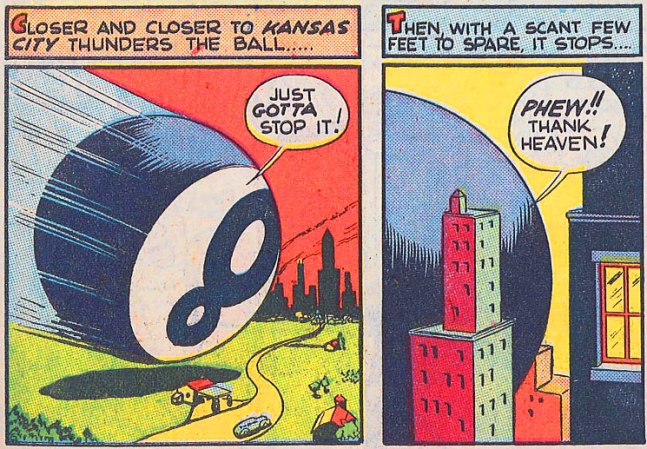 Plas is a hero, bringing us to the end of a particularly dark chapter in the Plastic Man casebook. 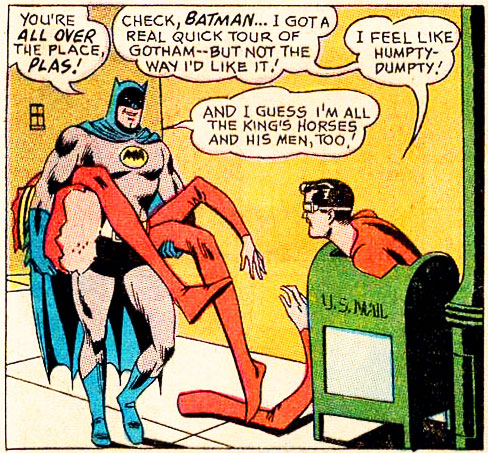 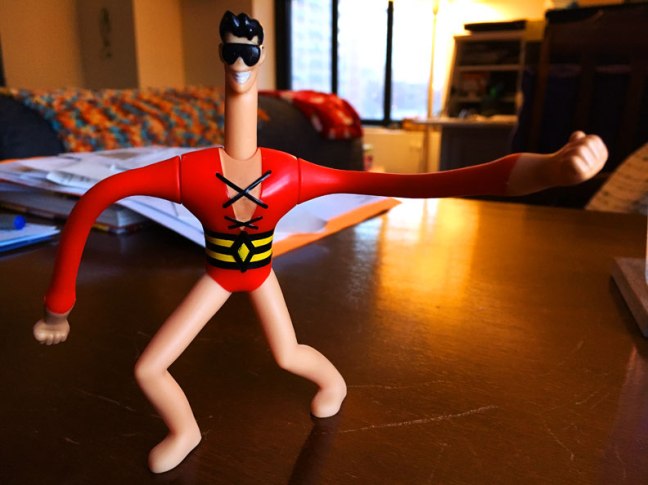 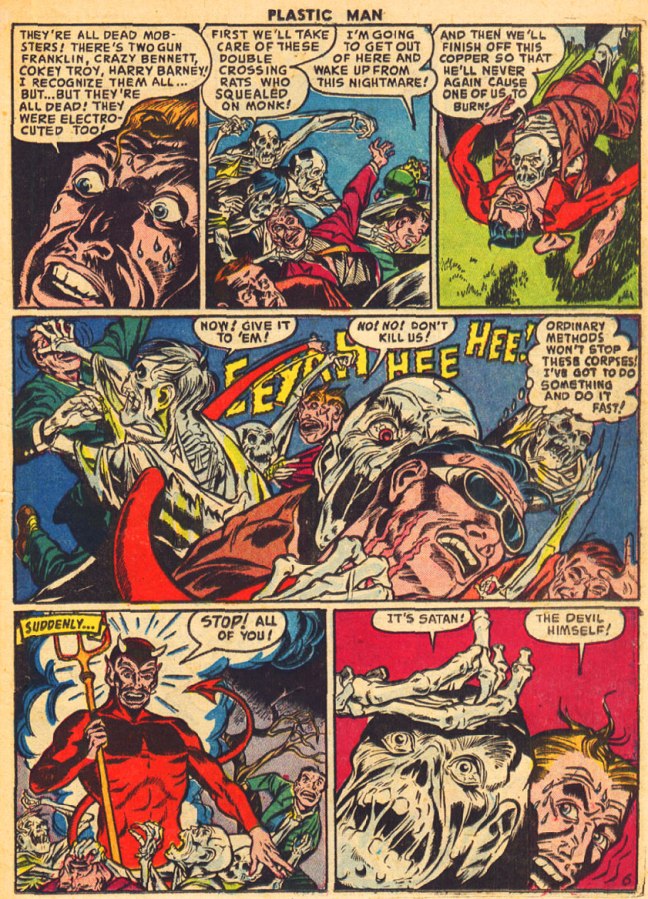 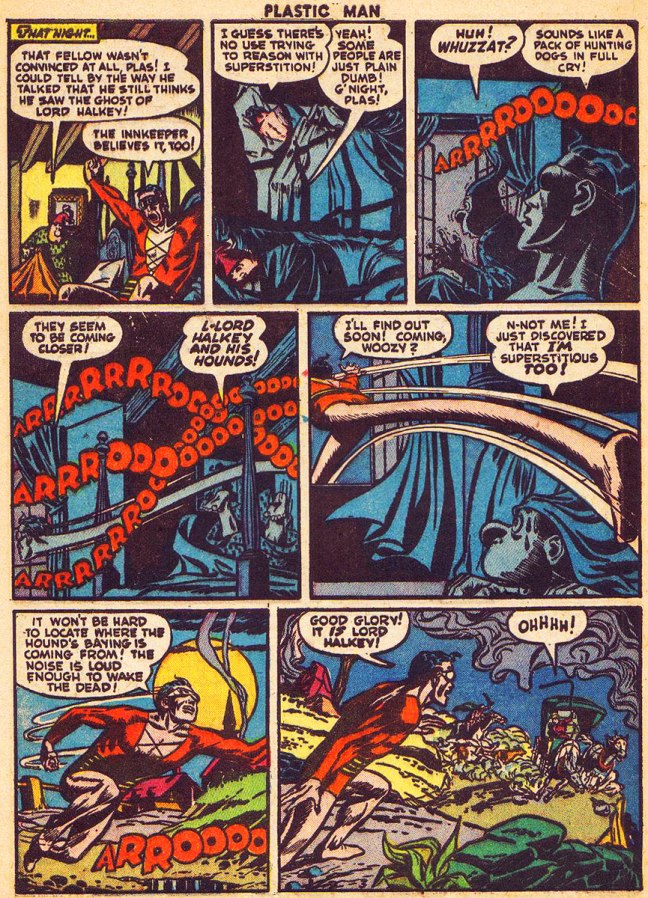 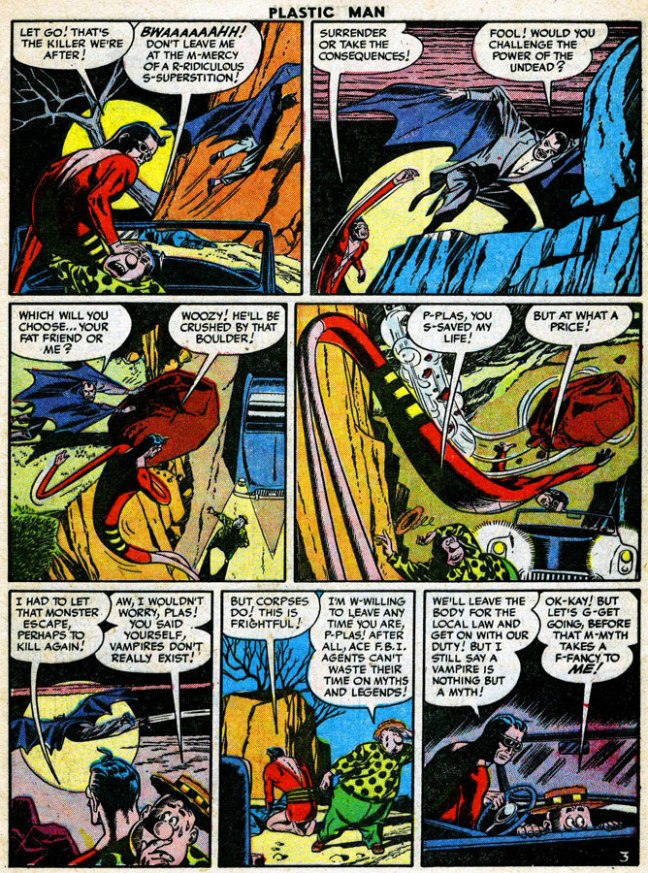