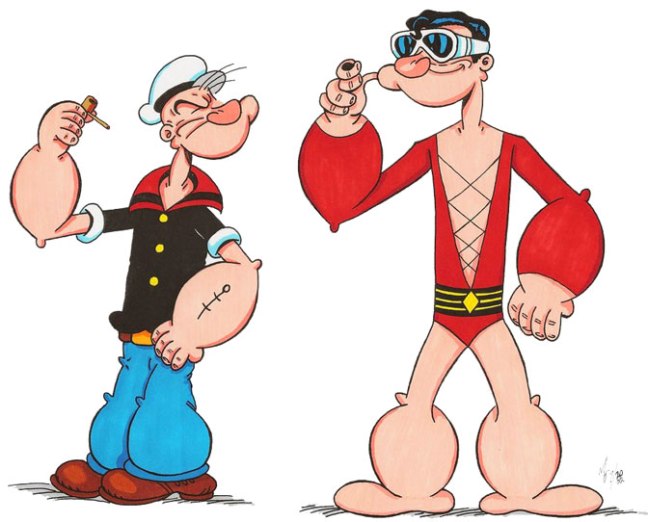 Artist Marc Greisinger specializes in drawings of classic comic and cartoon characters — with Popeye and Plas being apparent favorites (mine, too!) — so I was happy to come across his playful mash-up of the two. The irascible sailor-man and the easygoing Plastic Man are a fantastic pairing (even if Popeye doesn’t seem so sure), and Greisinger’s Popeye is stylistically spot-on. The highlight for me, though, might be the clever design of Plas’ “pipe!”

For more of Marc Greisinger’s work, check out his DeviantArt page.

I’ve been falling behind on posting again, so we’ll be doubling up on the updates this time around. First up is Plastic Man’s latest appearance over on the Super-Team Family blog, with Ross Pearsall matching the pliable paladin up with that Sentinal of the Skyways, the Silver Surfer! 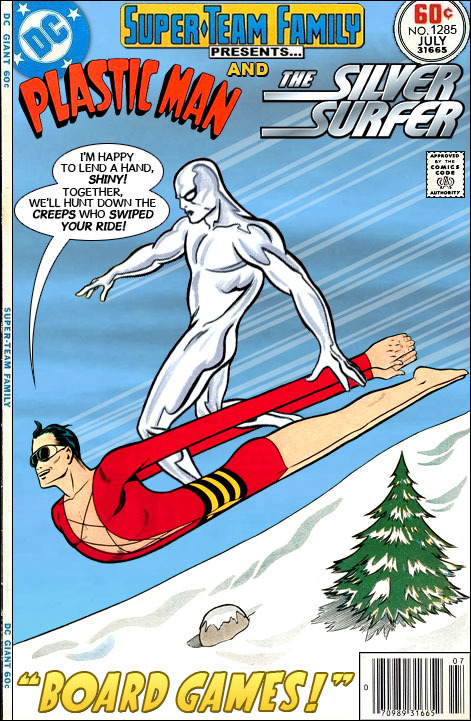 Bonus points for that clever issue title, by the way.

Ross always does a great job with this team-ups that never happened (but should have), and Plastic Man has been lucky enough to have make semi-regular appearances over the years. This pairing is particularly appropriate thanks to Mike Allred, the Silver Surfer artist seen here. Allred, who readers might know from his lauded creator-owned series Madman, also created a Madman spinoff called The Atomics. And in The Atomics there is a character called Mr. Gum who is pretty obviously based on a reformed-crook-turned-elastic-lawman. I mean, we’re talking right down to the suit colors and eyewear, which you can see in another of Ross’ mash-ups.

Neat, right? I’d have to say Plastic Man still has the better codename, though.

Next up is something we won’t be able to get our hands on until February, but it will be more than worth the wait (and the $30 price) — a Mego-style Plastic Man! 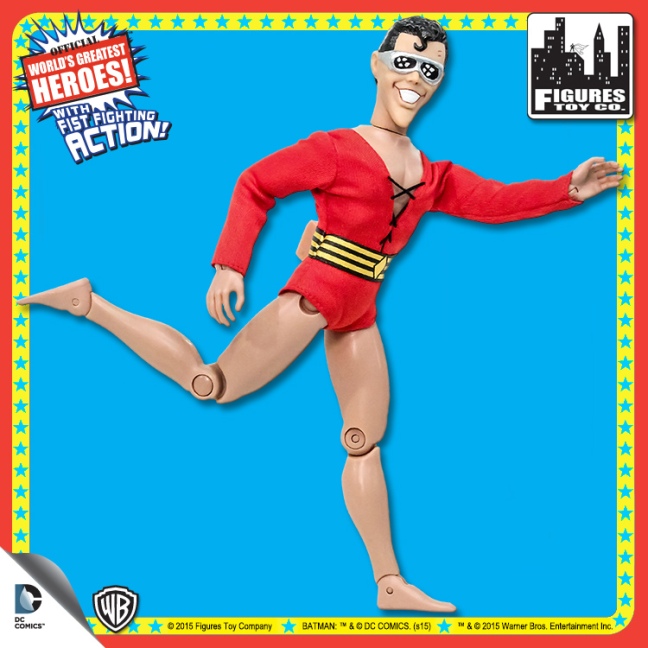 The figure will be released by Figures Toy Company as part of the third wave of its Super Powers collection, which I’m guessing is in line with the third volume of the Super Powers comic? Maybe? In any case, the figure does look as if it’s following the comics’ sweet Carmine Infantino character design. (Brief aside: I have a friend who not only seemed to find my Plas fandom amusing, but also once asked, “So what’s the deal with his goggles? Is he always looking at a window or what?” It’s a fair point, so we’re still friends.)

Other figures released as part of the series will include a Hal Jordan Green Lantern, the Flash, and a fairly awesome Martian Manhunter. Of course Plastic Man is at the top of my list, not least of all because (as far as I can tell) this is the first time the character has gotten the full, production-line, Mego treatment. There was a Mego Plastic Man that was like Stretch Armstrong, but this is closer to a more traditional Mego.

What I’m getting at is, Christmas is only a couple of months away. That’s all I’m sayin’.

Special thanks to Anthony Durso for pointing me to the Plastic Man figure. You can catch up with Anthony on Twitter, and check out his custom Mego packaging for Plastic Man at the Mego Museum site (it’s next-level stuff, guys)!

DC Comics released its latest batch of variant covers a few days ago, and they’re really some kind of wonderful.

Besides being a nerd for comics, I’m also a huge fan of movies — particularly the ones I grew up on — so the movie poster mash-ups the stable of artists came up with push all the right buttons for me. And man, what a stable of artists it is; Dave Johnson (who pulls off several great designs), Cliff Chiang, Bill Freakin’ Sienkiewicz, and several others, who created spot-on homages to movies including Bill & Ted’s Excellent Adventure, Purple Rain, North by Northwest, Enter the Dragon, Westworld, and many, many more.

All in all, great stuff, though I was a little disappointed that Plastic Man didn’t seem to rate an appearance. But a closer look, a few magic words (and the realization that the covers were spread over two entries at the DC website), and the pliable paladin appeared! 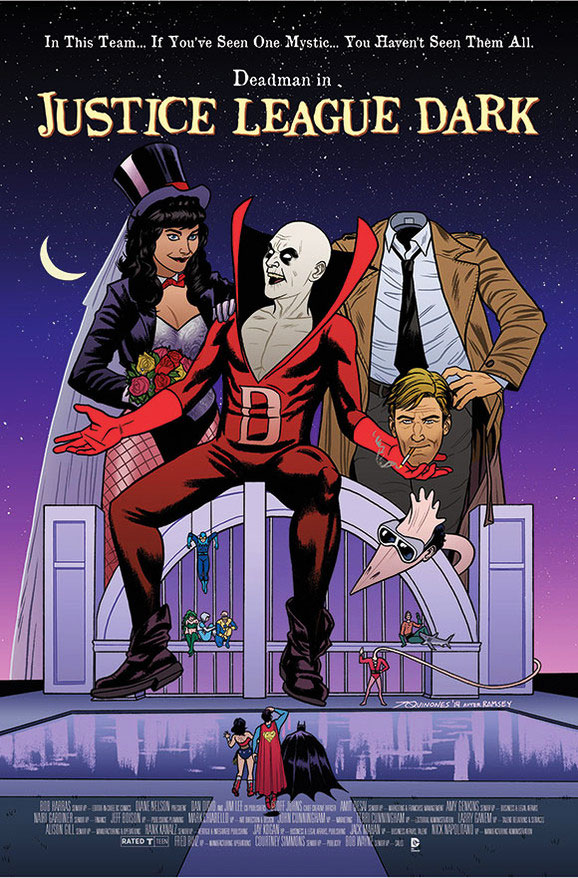 This is really a perfect use of Plastic Man and his shapeshifting ability. And who else in the JLA could you imagine dancing to calypso? This cover by Joe Quiñones does bring up a few questions, though: Could this hint at Plas’ return to the DCU? Could he be joining the Justice League, or even Justice League Dark (which would be weird). And poor Blue Beetle — Ted just can’t get a break, can he? (But that shark chewing on Aquaman’s leg is a pretty brilliant shout-out to its Beetlejuice inspiration.)

I haven’t been picking up Justice League Dark, but you can bet that I’ll be getting this issue when it’s released in March. If you’d like to see what else is planned for release during that variant cover month, go check ’em out both here and here. 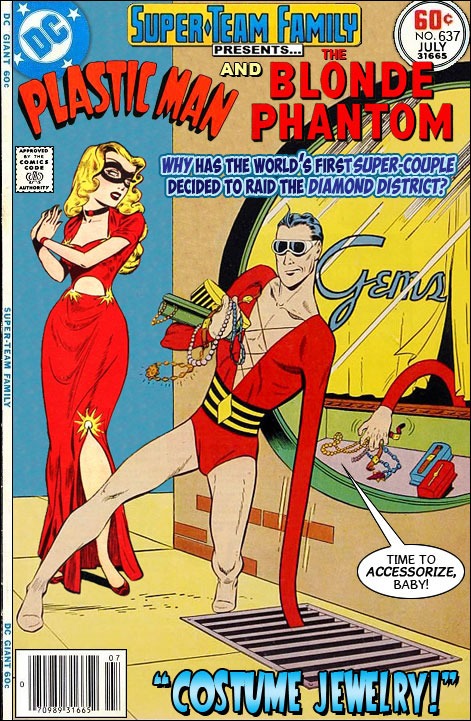 File this one under “Things I Wish Were Real.”

Ross Pearsall over at the Super-Team Family blog does a great job of doing exactly what he promises — providing fantastic covers for “the greatest team-ups that never happened … but should have!” Recently, Plastic Man was added to the list, paired up with fellow Golden Age hero the Blonde Phantom. I always liked Kyle Baker’s addition of Morgan as a steady love interest in the Plastic Man mythos, and the idea of putting him together with another strong, equally heroic female character really works for me. (Even though it looks as if the bombshell crime-fighter might’ve inspired Plas’ return to his old Eel O’Brian ways. Uh-oh.)

It’s a fun and inspired image; the only problem is I want to read this story, now!

This has been making the rounds, but its definitely worth a look (or even a second look). How often do you get to see Plas as the Sad Clown of Pop? Artist Butcher Billy didn’t stop there, either;  SuperMorrissey, Wonder Siouxsie, Devo-Flash — pretty much an entire post-punk JLA is represented. And there’s something kind of perfect about a Billy Idol Aquaman.

Prints and T-shirts featuring the artwork are for sale at Billy’s site, so go check it out. And, y’know, Christmas is coming. I’m a two-X. Just sayin’.