As I’ve said in earlier posts, there’s just something about Plastic Man’s origin that really makes artists and writers want to retell the story. Naturally, creators also want to put their own spin on it, and combined with changes in tone and efforts to update this Golden Age hero for fresh audiences, new things almost always get added to the original.

Because of that, Plastic Man’s origin might stay fundamentally the same, but we’ve also gotten a version of Plas who never met the monks of Rest Haven, another who’s mind was altered by the experimental acid as well as his body, and still another with a notable talent for exposition. Most recently, Eel O’Brian was dunked with strange chemicals thanks to an alternate universe  variant of Batman. (Which is a little poetic, considering the longtime friendship between Plas and Bats.)

There are more versions of Plastic Man’s origins than there are days in the week, so let’s take a quick look at some of them. First up, here is a fairly faithful retelling from Plastic Man #17 (vol. 2) by writer John Albano and artist Ramona Fradon. I say “fairly” because while all the major points are there, the team opted to get rid of Rest Haven and only hints at “Ya putrid punks!” 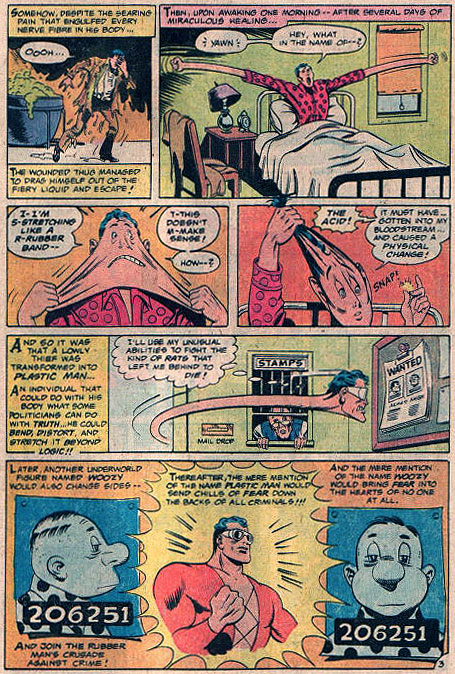 And here is how Phil Foglio (writer) and Hilary Barta (artist) kicked off their four-issue mini-series in Plastic Man #1, with “reality checks” by artist Kevin Nowlan. The work by Nowlan helped differentiate the “real world” from the cartoony way Eel O’Brian perceived the world after being doused in acid. Later, Plas befriends Woozy after our portly pal stops him from committing suicide and then reveals that — as a recent resident of Arkham Asylum — he sees the world the same way the Eel does. (This is also the story in which Plas and Woozy leave their futures as either crime-fighters or partners in crime up to a coin toss.) END_OF_DOCUMENT_TOKEN_TO_BE_REPLACED I’m coming late to this since I don’t buy many weekly comics anymore, but I might have to start again because PLASTIC MAN HAS ARRIVED!

Well, maybe. In last week’s Justice League #25, Earth 3-Owlman is wreaking havoc in Earth Prime-Gotham as part of the Forever Evil thing DC is doing. Just before he busts in on a meeting of Gotham’s crime bosses, we’re introduced to a hood named Eel — a dapper guy who likes to play with rubber bands and winds up getting shot in the shoulder and doused with an unnamed chemical.

The art is by Doug Mahnke, so of course it’s fantastic. If you look closely, you can see little Plastic Man touches here and there; the pin-striped suit, the wavy curl to his hair after he’s been bathed in what I’m hoping is some sort of acid (as horrific as it looks).

I do have some questions, though. Starting with — what happened to Justice League International #1? You might remember that Plastic Man has already made an appearance of sorts in the New 52 when his name and picture are featured as part of the JLI selection process. Is time out of step? Is that a different Plastic Man, like the Plas Jr. of the Silver Age? Or is Johns just straight up ignoring JLI writer Dan Jurgens’ inclusion of Plastic Man altogether?

Personally, I’d be OK with that. It was an incredibly brief, and completely ignorable, appearance in JLI #1, with no mention of Plastic Man again until now. And I like the poetic, “dark mirror” circumstances of this origin; where Batman dunked a crook in chemicals and created a villain in the Joker, Batman’s evil counterpart Owlman does the same thing and — hopefully — creates a hero. (Please, Geoff Johns, please let there be monks.)

On a final note, how cool is it that Skizzle Shanks makes an appearance?! Skizzle was the leader of the crew Eel O’Brian was running with when they hit the Crawford Chemical factory back in Police Comics #1, and showed up again with a plot to hit both Plas and Superman in DC Comics Presents #93. He survived both of those run-ins, but somehow I don’t think Skizzle is going to make it out of this one.

The real question is — will Eel O’Brian? Are we finally seeing the return of Plastic Man to the DC Universe?