In the late Spring of 1941, Plastic Man stretched out of the mind of genius Jack Cole and onto the pages of Police Comics #1, where in just short six pages he would go from notorious criminal to happy-go-lucky hero thanks to a stray bullet, some unknown acid and the kindness of a local monk.

And that’s just the beginning.

The origin of Plastic Man begins with his alter ego, safecracker Eel O’Brian who is working with the Skizzle Shanks gang to rob the Crawford Chemical Works. But whether through overconfidence or Shanks’ poor planning, a guard gets the drop on the hoods.

I love the carnival barker hyperbole of that intro and the way it tells just enough to hook the reader — not to mention that wonderfully composed splash at the top (complete with inspiration for the name of this blog!). I’ve said it before but I’ll say it again (and again and again); I’m always impressed by the way that simple costume design is so iconic that it has been virtually unchanged in 74 years. Jack Cole: Genius.

You can also see how, right from the start, Plastic Man was a funny comic that wasn’t a humor comic. In other words, it wasn’t telling jokes or trying to put vaudeville on the page — it was just funny with small asides and character reactions. I don’t know which I like more in that last panel, Eel calling them putrid punks or that cheerful, “Adios, Eel!” But, boy, does Eel look mad.

After taking a couple of bullets, getting drenched in acid and then being abandoned by his cohorts, Eel staggers away from the scene and into the nearby foothills. He manages to lose the cops, but soon collapses, overcome by the strain and the acid seeping into his wound. When he wakes up the next morning he finds himself in Rest-Haven, a monastic mountain retreat where a brother tells Eel that he has been taking care of him since he was found on the trail earlier. More amazingly, the brother tells Eel he turned away the police who came looking for him that morning.

Is there any other superhero whose origin is based almost completely on kindness? I assume there must be, but I can’t think of one. Eel O’Brian’s whole life is turned around because someone told him, “Hey, I see something in you, something good … something you’ve lost sight of in yourself. You deserve a chance.” That’s amazing. And keep in mind that Eel hasn’t discovered his powers yet; as far as he knows, he’s still just a regular joe.

One more thing: Take a look at that last panel. Cole was already toying with perspective, shadow and “camera” angles, bringing a cinematic flair to his work. We’ll see this come out full-force in later stories, but it’s neat to see it sneaking in here.

Oh, and that thing I said about Eel not realizing he’s changed from hard-nosed crook to man of rubber? Well, a quick stretch of his arms reveals he’s got more of a reach than he did the day before, and after pulling his face like putty, he comes to a quick decision.

I’m totally entering every room with “Hi, punks!” from now on. These panels go a long way in showing how clever Eel really is — not only did he have the foresight to go back to his gang acting as he just wanted his cut of the Crawford job, but he’s quick enough to insist on being the get-away driver and putting a plan into action. Also, there’s a rabbit.

As the rest of the gang goes into the building to grab the bank messenger, Eel sees his chance to change his clothes AND his face. The gang quickly grabs the money and start to make their way out of the elevator’s escape hatch. Unfortunately for them, they’re about to get a helping hand.

A couple of things to note, here. First, as the reader can see, this is before Plastic Man realized he was bulletproof, otherwise those wiseguys would’ve gotten it right there on that ladder. And secondly, this is Plastic Man’s first official shape-change! Granted, he just made himself look like a rug, but changing shape to disguise himself as some innocuous object would become a hallmark of the character. It also leads us to these fantastic panels.

Oh, man — that one guy screaming “Eek!” just kills me.

Plastic Man quickly dispatches two of the thugs, but the other two manage to slip past him and make their way to the roof. As they shimmy down a rope along the side of the building, they realize they aren’t getting anywhere — Plas is pulling the rope up! (Plastic Man seems to have greater-than-normal strength … something that never really comes up otherwise, but how else would he be able to lift and move things at all those angles?) Soon enough it’s a brawl, but the first two crooks manage to make there way to the roof and … 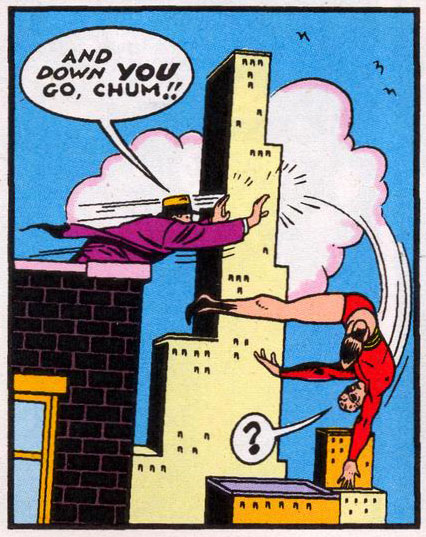 Whoops! Luckily, as I said Plastic Man is a quick thinker, and even though he’s new to these powers and this is his first time fighting crime, being thrown off a 20-story roof doesn’t even slow him down. 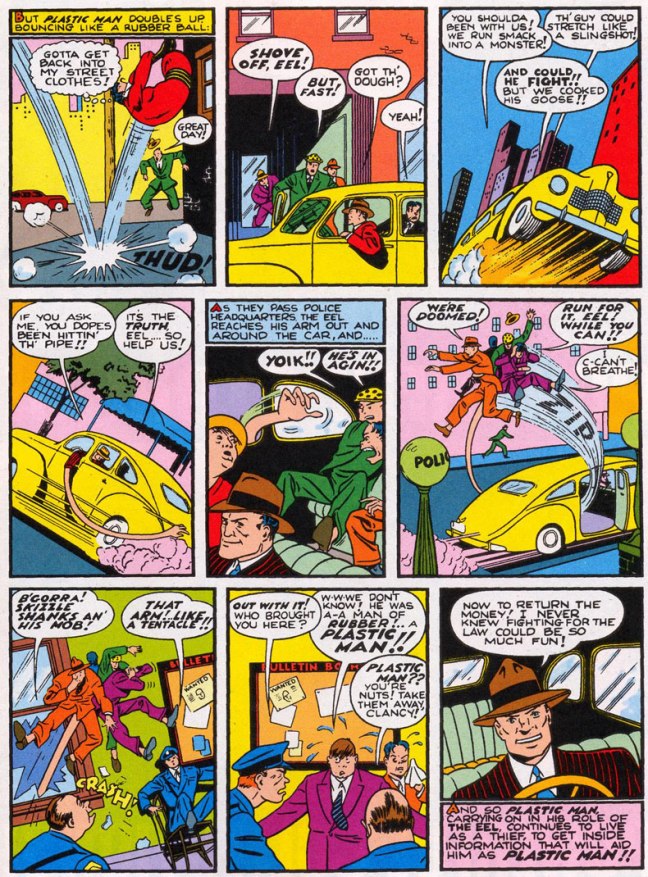 And so ends the action-packed, six-page origin story of Plastic Man! It’s one of my favorite origins of all time, full of excitement, redemption and fun. Cole’s art is already a marvel to look at with a dynamism that’s sharp even as the art appears — deceptively — simple. (Seriously, go back and look at those panels again, check out those angles and points of view. Then bask in the glory that is Eel’s shit-eating grin in panel five.) And something that doesn’t get mentioned often enough is Cole’s dialogue, which feels realistic and gloriously kooky at the same time.

Finally, the last panel’s caption box tells the reader everything they need to know and gives us Cole’s final twist: Plastic Man has launched his crime-fighting career, but this time his old identity will be the mask. Instead of being Eel O’Brian changing into Plastic Man, he’ll dedicate himself to being Plastic Man, with his old life as Eel being the real disguise.

2 thoughts on “Recycled: A review of The Origin of Plastic Man!”